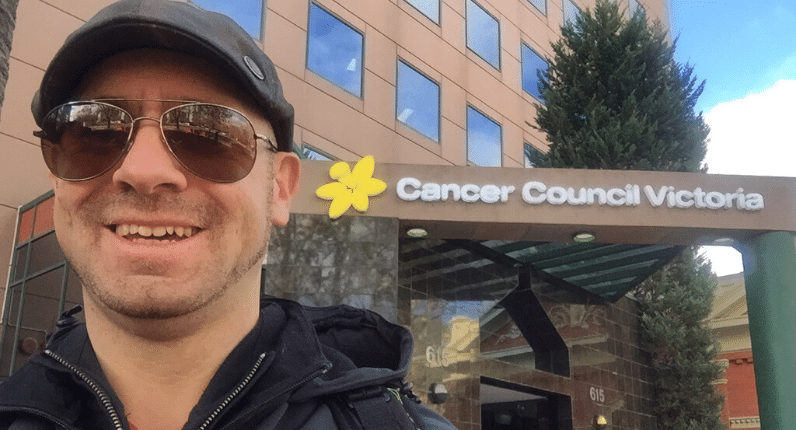 Today is a strange day for me. Honestly, I am a little shocked.  Even with a positive outlook, it is still very surprising that I am here to be able to write this.  By rights I should be underground, buried under a heap of dirt, a fond memory for my family and friends. Three years ago today I suffered my first and second seizures.  Despite my protests, I landed in hospital and had my life abruptly change. This was the day I met Timmy but was yet to know his name. (Read more about Timmy here.) This was the first day of what was to end in being given a terminal cancer diagnosis – it really hits home actually writing that.

When we arrived in the emergency department I was very quickly rushed off to have a CT scan.  I thought that this was a bit dramatic. When they came back to tell me I had a tumour I had to check the bed because it felt like I was in an earthquake.  I was too young to have to deal with a serious medical issue let alone one that could kill me.

After being told the type of tumour, a quick Google search advised that the average life span was 6 months, and that less than 20% of people diagnosed with this tumour would live to two years.  This I found after sifting through numerous posts and pages describing my tumour cheerily as “The Killer Cancer”. Naturally this gave me hope! Despite the gloomy outlook, I decided that I would treat it like a Melbourne weather forecast – always wrong – and define my own path.  Yes, I was going to listen to advice but given the prognosis, I realised very quickly that this was my life, I was the one that had to choose how it would be spent and how it would be remembered. It was not for any one else to live but me. I had to take full responsibility.

I am pretty certain Timmy won’t mind me saying this but he has had significant weight issues.  In the 3 years we have been friends he has undergone multiple “plastic” surgeries to control his weight and has had some radical chemo and radio diets.  Thankfully these radical measures have allowed Timmy to lose weight and keep it off for the time being. I am pretty certain he is up there checking out the before and after scans saying “Dayymmmnn! I look good!”

Like all friendships, we have had our ups and downs together.  When I first met Timmy he took my independence. I can no longer drive due to the risk of having a seizure and I do still wonder when I go out on my own will this be the time that I have a seizure without anyone around to help?  I realise I am completely vulnerable, anything could happen, but I choose to make that an exciting part of my journey. I cannot change it but I can change my approach to it. He also tends to cause me quite significant pain on a relatively regular basis. Pain that I rarely admit exists. I do not want people to worry, so it is more often easier to deal with the pain and continue on. After all, there does feel an expectation to deal with this with grace and poise. I recognise that is an expectation I have of myself, not really one that others impose on me.

There have been times I have become extremely annoyed with Timmy.  For example, when I forget things or am not as sharp as I used to be, I find myself becoming more and more frustrated with him.  When I get so tired during the day that I can no longer see straight, all I want to do is yell at him, to take it out on him. It can be extremely frustrating and embarrassing to stand in front of someone and not be able to remember an event that happened recently, or be able to put into words an easy idea because either I can’t find the word or have forgotten what it is we were speaking about.  Timmy can make me feel completely incapable, vulnerable and self-conscious.

However, while Timmy has taken a lot from me he has also given me more than I could ever have imagined. Yes, he has given the fatigue, headaches, memory lapses and confusion. However he has given me perspective that I don’t think I would have had any other way. He has demanded that I learn to be positive and find the best in every situation. He has taught me to define what I truly want my life to represent and made my values more clear to me so that I can live that life.  He has given me a gift of becoming much closer with my family and having a deeper connection with my friends than I ever believed was possible. In short, he has given me a life that is truly worth living.

Despite the vulnerability, the pain, the loss of power and independence – or maybe because of that – I have a clearer understanding about driving my life rather than letting external circumstances drive it. I have realised that my goals do not matter unless they are aligned closely with what I value in life. I know when I am on point, when I am doing what I truly value, that I am living my life as fully as possible.  And that whether I am above ground or below ground this time next year doesn’t matter, as I will have truly lived.