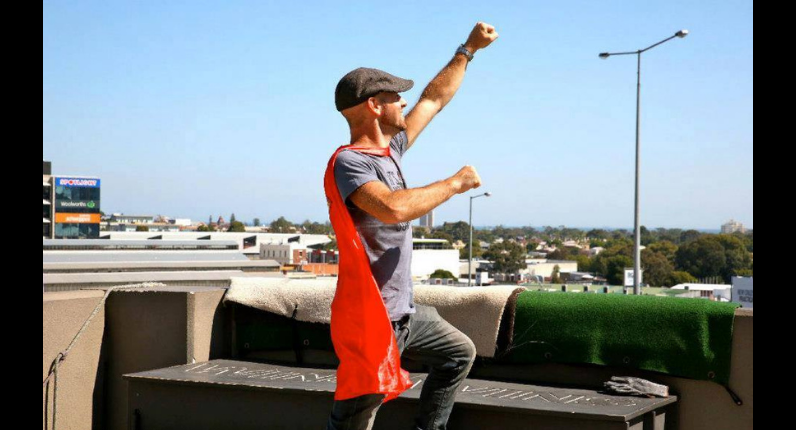 One day, Sensei Cameron broke one of these rules.

It was the early 2000s, and we were still teaching in a school fire refuge that was our part-time dojo.  Sensei Cameron was leading the Instruction of the class, and I was on ‘crowd control’ – the floating Sempai who helped correct technique and behaviour on an individual basis.  We had just started the class, stretching was over, and we were practising our punches.

This was when the trouble began…

Sometimes, for largely unknown reasons, the kids managed to get some sort of telepathic consensus that they would all play up simultaneously.  Classes like these were the most challenging.

I started to notice a fidgety alliance going on in the rear line of the class, so I rushed over and did my best to positively encourage the behaviour we wanted out of the class (to focus and try their best).

“Ben, that is some very fast spinning on the spot, but can you show me your upper punch?”

Success!  Ben refocused, and his buddy Sarah had stopped giggling at him.  But that was not all this class had in store for us.  A mental memo had gone out to everyone:

Now, we were no strangers to unrest – Sensei Cameron frequently would hype the class up, doing laps around the dojo, often wearing a clown nose he had produced from inside his gi.  He would leap into action during a quiet period of the class, usually when I was leading a session.

Why did he do this?  No reason, except to bring joy to the kids.

On this occasion, however, Sensei Cameron was not the instigator.  Ben and Sarah were still focused, but James was fidgeting in his spot.  The fidgeting spread like some sort of wave, like the ones you see the crowd doing at a cricket match.  Soon, almost the whole class was unfocused, spinning on the spot, touching each other, everything except practising the punches.

I went into ultra crowd control mode but was rapidly being overwhelmed, running from student to student in an attempt to gain calm in the class.  I think that Sensei Cameron was probably imagining me as a pirate frantically bailing water from a sinking ship, using a bucket with holes in it.  Sensei liked pirates.

Sensei Cameron stuck to the front of the class, as this was our standard approach.

In very extreme cases, Sensei Cameron would let out a booming “Quiet!!!”  (Some of our earlier families would remember this).  It always made the whole room jump.  The kids would instantly stop whatever they were doing and look at Sensei.  The parents would jump just as high – there were quite a few spilled coffees back in those days.

This day, however, there was no booming “Quiet!”  Sensei Cameron could see that all my attention was going to the students who were mucking up.  He instantly recognised something that I did not and sprung into action.

Sensei Cameron turned his back to the class and knelt on one knee.

What was he doing? – One or two of the fidgeting students stopped and stared at Sensei Cameron.

Sensei Cameron stood up, turned around and marched towards Andrew.

I was puzzled.  Andrew was the only student that had been standing like a black belt, paying full attention and trying his absolute best the whole time.  So why was Sensei Cameron approaching him?

Sensei Cameron approached Andrew and started to remove Andrew’s belt.  “Oh no”, I thought.  He must be confiscating Andrew’s belt!  “But why?”  Sensei must have thought Andrew was misbehaving.  “I should say something!”

But what Sensei did next made it clear why he was doing this.

Sensei Cameron took his own black belt, wrapped it around Andrew’s waist, tied it up, so Andrew was wearing it. Sensei returned to the front of the class.  Everybody in the room was now fixated on Andrew, including every parent!  Sensei Cameron then resumed teaching the punches – counting one, two, three…

Every student was now trying their best, and Andrew was beaming.  Sensei Cameron had changed the entire approach to our teaching style in that moment.  He had gone from a punishment system to a reward system – from focusing on what is wrong to focusing on what is right.

Sensei: “Correct, just like Andrew has been doing the whole class.  He will be wearing my belt tonight.”

This was the day Sensei Cameron broke the rules, and in doing so, redefined how we create superheroes.