In the beginnings of Paragon, we had a strict format for lining up and bowing at the start of class.  Sensei Cameron would stand out the front of the class and the Sempai (me) would help any student who was having trouble finding their spot.  The white belts were on the right of the room and in the front row.  It then increased in rank until you got to the back left.  This was in contrast to most martial arts schools, who tend to line up their classes with the highest grades at the front – Sensei Cameron preferred to have the newest and least experienced students closer to him, where they could see him better, where he could see easily if they needed more help, so they were not lost at the back of a big class, wondering what was going on. The Sempai or highest grade assisting the class would then stand out the front, next to Sensei Cameron.  Most of the assistants would stand on his left; the right he reserved for me. There was no real reason about the left or right.  It was just how he liked it.  Perhaps I was closest to the entrance on our right to assist anyone coming through the door, perhaps not. I never really questioned why he did things – he is my big brother; it always just seemed right.

This photo is actually from a trip Cam and I took in the UK and Iceland.  The photo was taken on the Rik Mayall memorial bench in Hammersmith.  This was a very exciting day for the both of us…

With that short exchange, we knew exactly what was happening for the next two hours. Classes had just finished on a Saturday, and the last student had finished playing after class and had left.

“Spaghetti” meant that it was time for pack-up to begin.  The Paragon teaching team will not be surprised that the pack-up had a very specific routine.  Even back in 1998, Cameron would follow the same routine every day to clean the hall after classes. I won’t explain the full pack-up process, but it won’t surprise you when I tell you this: EVERY class, Cameron took the full karate kit to and from the hall that was our makeshift dojo and fully cleaned the hall.  The kit consisted of a huge bag that took up the entire boot of the car.  It had two kickshields, a letterbox (the same colorful one at the supercentre today),  three basketball sized ‘spikey’ balls that we used for poison ball, 6 small soft balls (some of which are still at the supercentre today), 4 half noodles that we used for spar-wars, the training manual, 2 focus mitts and a set of tails (parts of belts).  I remember it well. (I even wrote this list here in the order  it was packed.)  Sensei Cameron had a very specific way and order to everything.

Along with the giant bag, he carried three full sized pool noodles, two wooden bos, and six pink jigsaw mats.  Then there was the laptop bag; everything in the proper section of the bag and the power cord folded in a way that exactly followed the existing bends in the cord.  I would miss a bend in the cord every now and then, just to see him uncurl the whole cord and re-do it – never telling me off for doing it wrong – the perks of being his brother!

“Spaghetti” also meant that after we arrived home and put everything fully away, we started cooking spaghetti.  That also had a process.  Not because it had to, but because we had done it so many times.  Every Saturday afternoon, karate was followed by spaghetti which we ate whilst watching our favourite comedy. This comedy starred Rik Mayall – hence the importance of visiting his memorial bench when we went to England.

We watched that show so many times.  It was on video, and we rented it.  It was a monthly rental so we would return it and then re-rent it.  This went on for years, until one of us thought it would be an idea to buy the video (yes, video – this was before DVD).  Belgrave Video made a fortune off that video rental!

Cam and I could recite every line from the show. We even each had a character we would play, and almost 20 years later, we were still calling each other the character names more than we would call each other our real names.  The show became our secret language.  We could convey entire conversations to each other by using one word or one line from the show.  “I’ve got some sad and tragic news,” would cause the other to burst out laughing because we knew that that meant that one of us had seen something hilarious.  This would confuse people with us at the time, who were often shocked that someone would laugh at tragic news.  Their confusion would intensify even more when one of us would respond, “Well, you seemed a lot sadder in rehearsal.”  What?

I remember taking this photo. I knew it existed, but when I looked at the combined photo library Cam and I created to share photos with each other, it was not there.  I went back to several backups Cameron kept, I checked his iCloud, I checked my backups of my phones – it was not there.  I started to think I had just imagined it.  It would make sense that I had imagined a photo where one of us is looking for the other one and them not being there. Then a week ago, I was preparing a spare phone to be used for a job when I decided to plug it in and make sure I had all the data backed up before I wiped it. And there it was.  I hadn’t imagined it.

Cam, I used to stand on your right in class.  It started there and continued for the rest of our lives together.  In most of the photos I have of us, I am on your right.  As the cancer grew, you lost the use of your left side and felt nothing but pain there. You also lost the vision in your left eye, and I would stand on your right so you could see me and I could touch you without sending a bolt of lightning through you, which happened whenever someone touched your left.

On the occasion that I would stand on your left, you could not see me and would sometimes say, “We’ll just wait for Nathan,” not knowing that I was right there.  I didn’t like you thinking I wasn’t there, so I kept to the right.  Look to the right, Eddie.

I remember the day I was called home.  I was in England, on a work trip.  I had recently gone to some of the places we visited together.  Mum called me early in the morning.  Cameron needed to go back into the hospital.  Mum told me that he had said, “It’s okay – Nathan will be here soon.”  At that stage I had no plan set to come home in the next few weeks.  I collapsed on the bed of my hotel room when Mum told me that.  I had never felt so far away from home.  Cameron wanted or thought I would be there.  He was looking to the right and I was not there. I removed myself from the workshop and caught a flight home that afternoon.  Cameron died a couple of weeks later. 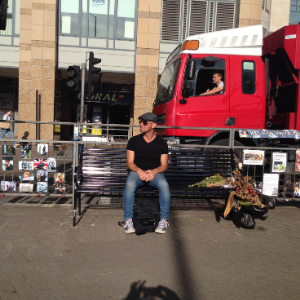 No. For me, this photo says one thing.

Cam, you used to look to your right to see where I was.  For so many years, I Iooked to my left, and there you were.  Now, when I look left, you are not.