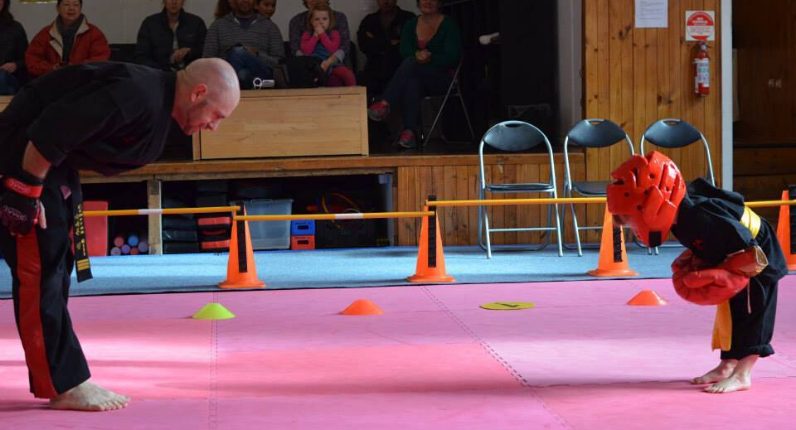 “We Create Superheroes.” This is the tagline of Cameron’s Superhero school, ParagonInc.

Cameron started Paragon Martial Arts when he was just 20 years old, in August 1998. Disillusioned with his Engineering degree, he had made a decision to transfer to Physiotherapy, and found it much better fed his passion for movement, and his interest in pushing the boundaries of what the human body was believed capable of. Never one to do something by halves, and having made one giant leap away from something that didn’t feel like a good fit for him, he decided in the same year that he did not have to accept the status quo in any area of his life.

As a karate teacher for more than ten years, since before he earned his first black belt at aged 10, Cameron was unhappy with the competitive and elitist culture of most martial arts schools, which spotlighted and promoted those to whom movement and strength came easily, and left behind those with less “natural talent” who had to work much harder to achieve less success. Cameron dreamed of a better school, a better teaching approach, that would support and empower every child, and unleash the inner superhero in every student. He dreamed of more than a karate school. However, karate was what he knew best, so he started his own karate school. It soon became much, much more.

Every year of Paragon’s history, Cameron pushed for more. Within the first couple of years of starting the school, Cameron was a physiotherapist working in paediatric early intervention. When he would visit kids at their kinder or school, he would hear about the activities and adventures and sports their friends would get up to on the weekend. It broke Cameron’s heart when they would tell him they watched television all weekend, or got dragged along to watch a sibling play basketball, while they sat on the sidelines. He began to offer therapeutic karate classes, tailored to the individual needs of students with various disabilities. He called it “therapy that doesn’t feel like therapy” and a multitude of kids with special and additional needs, for whom there were no inclusive sports available at that time, were able to fully and actively participate in their own karate program, earning new belts each term, and for many, graduating into the mainstream program, where they trained alongside their same aged peers without disabilities. ParagonInc still runs this program today. Cameron was truly a pioneer in his field; it was many, many years before other mainstream sports began offering inclusive and adaptive programs for people with disabilities.

More than a karate school

Paragon Martial Arts was always more than a karate school. It fostered an amazing community of superhero parents and kids, families who became part of something so much more than what they anticipated when they signed up for karate. Superhero challenges, the superfood garden, and Paragon events, especially the Christmas parties involving epic water fights at the lake, and the impossibly fantastical adventures of the Halloween parties, Cameron, known as Sensei Cameron to thousands of kids and families, was always searching for something bigger and better and more magical for the kids.

His programs also evolved and grew into something so much more. As he developed and improved his curriculum over many years, Paragon Martial Arts also evolved. Sensei Cameron’s programs became about so much more than karate. He renamed the school ParagonInc, and he called it a superhero school, and he envisaged that karate would become simply a mechanism by which to engage and enrich the lives of children and teens, rather than the sole focus. ParagonInc continues to provide a range of life and leadership skills, including social action and advocacy programs, resilience training, and other social and emotional learning programs for children and adolescents, in addition to self defence and martial arts.

Handing on the future

In August 2018, at Paragon’s 20th Birthday, Sensei Cameron awarded the title of Sensei to his brother Sempai Nathan Gill, who was Paragon’s first black belt student many years ago, and to Sempai Sarah Kirchmair, a teacher, student, and friend of ten years, who had been managing the school alongside Cameron for the previous five years. Cameron referred to this award ceremony as “handing on the future” to the next generation of Paragon Senseis, and Sensei Sarah and Sensei Nathan continue to run the school as his successors. The school goes from strength to strength, in line with the vision that is his legacy, and continues to create new generations of superheroes. You can find out more about ParagonInc and its programs here. You can also follow our adventures, superhero challenges, and events on the ParagonInc Facebook page.