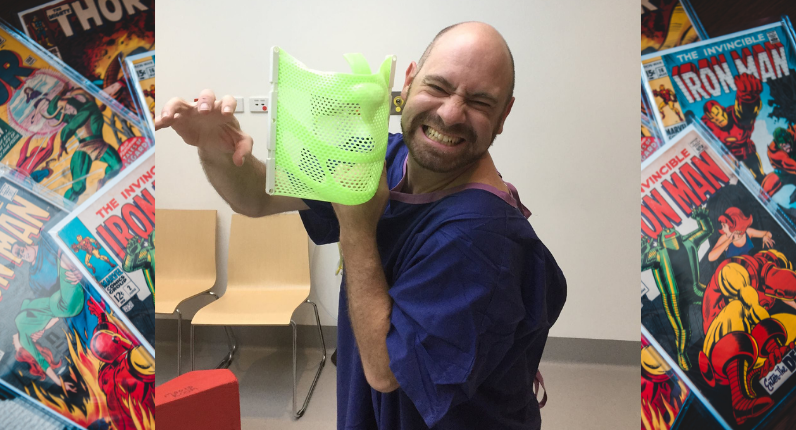 What’s Wrong with this Picture?

As a kid I was taught to believe that radiation exposure would lead to developing super powers.  Tonight whilst inside the tunnel of the MRI machine, my head locked still and plumbing in my arm I reflected on the number of times I have had MRIs with radioactive dyes, well into double figures now.  As the rapid banging sounds associated with the MRI began I remembered the amount of radiation I was exposed to in the last 3 years since Timmy, my friendly yet aggressive grade 4 brain tumour, first started hanging out.

According to Marvel, a very reliable source of information I am assured, by now I should have developed some super powers.  As you can see in the photo. I have no super powers!

I am unable to shoot laser beams out of my eyes.  To be honest I’d say my ability to see has worsened.

I am unable to shoot spider web out of my wrists.  I had imagined having the ability to swing through the city, climb walls or wear spandex in a somewhat flattering way. This sadly is untrue.

2 April 2022: We have posted this previously unpublished, unfinished blog post on the 3rd anniversary of his passing to share some of the humour with which Cameron embarked on all his medical procedures and treatments during the course of his journey with brain cancer. At the time of writing this, Cameron was strongly driven to share his story and impact as many people as possible, and had talked about tagging Marvel in this post, as a way of garnering interest in his newly formed “Tumour Humour Foundation”. As you can see by the abrupt ending, the blog is unfinished. Rather than finish it for him, we chose to leave it as he did, and imagine him off chasing after the next squirrel.